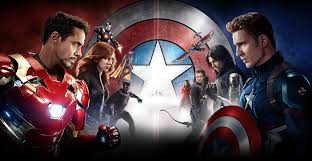 Yep, I am one of those Christians that like to see an underlining theme in movies. Or in other words how it can be relate-able in christian terms.

I recently watched Captain America Civil War. I. Am. A. Nerd. Do not judge me. I love super hero movies. There is something about seeing good prevail over evil.  I suppose because so often we see bad things prevail in our world and it is nice to see truth, justice, and the good side win!

By the way, I have grown to become a super Captain America fan. He was from the generation that was considered the “greatest”. Why?  I suppose because that particular generation, worked hard at a young age and saved the world from a great evil. (Truly, I believe God gave them favor)

But back to the movie.  I noticed a couple things with this movie that I wanted to share. First off, Capt. America would be considered a man of “morals” and maybe even a bit of “faith” to a extent. So, in past films we see him say things like “There is only one God” “Watch your language” etc. Which got cheers from the Christian Marvel community for sure.

I was noticing as the team was assembled and being told they needed to join the United Nations, only the few stood against the idea. One was Capt America. To me this whole scene screamed of that which is currently going on in our nation and in our world. Cap represents the conservative republican. While the others,supported the idea that the one government could control them.Captain America coming from a freedom loving country, would obviously not like the idea that one government controls them.

We see our administration bowing before the world. I’m not too educated in this, but I have not seen this administration speak up or against the U. N. Now as a christian this is something that I know will happen.(One World Order) our world will have one government at some point and we are going to that quickly with this leadership.

I do like that Cap was not easily swayed. He thought it through and even when his “so called friend” Tony Stark tried to talk him in to agreeing to term, he still could not cave. He stuck to his guns, so to speak. That is the true traditional conservative American way.

The next thing I noticed was the parallel with Christ and Capt American in the last fight scene with Iron Man.

Bucky(Caps friend) was brains washed to do horrible things. One things was to kill Tony Stark’s parents in order to retrieve a package that they were transporting. Tony Stark’s sees this footage of Bucky killing his parents and goes ballistic…literally. Now Cap is trying to tell Tony that Bucky didn’t do it because he was being brainwashed at that time. Now clearly Bucky was a changed man and felt sorry for his mistakes. Tony doesn’t listen and pounds even harder on this super soldier.  Cap joins in on the fight Iron Man. Iron man now knocks Bucky down and is about to end Bucky when Cap knocks him down.

Iron Man now turns his attention onto Cap. He wails on him over and over. Iron Man wants Cap to stop and give up. Caps response is if there was any other way…but…”He’s my friend”  so Iron Man proceeds to pound Cap, eventually, Cap turns it around and starts to go all out on Iron Mans Helmet. Once it is knocked off Captain America grabs for his shield. Just when you think Capt America is going to lose it and sever Tony’s head, we see the shield come down on the power source of Iron Mans suit (which is near the heart) Ending the battle.

Bucky is us as a sinner. In our sin we did things we didn’t realize was “bad” but once we had our eyes opened we realized our shame and repented.

But then there is Capt. America. He steps in as the Jesus in the scene. He fought on the behalf of Bucky. Just like Jesus fights on our behalf. Because we are a friend of God now.

This may be a cheesy take on things that are spiritual. And having only seen the movie once it is just a quick take on the movie and how I saw a neat parallel. Please feel free to add comments or if i misinterpreted this or if you have more insights.

I just wanted to get this thought out there.